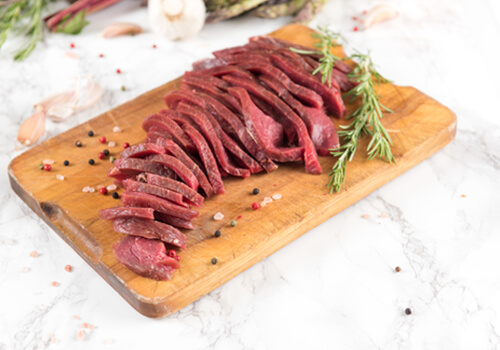 While the first bison grading system in Canada was developed in the late 1950s, it was never actively put into practice until official grading began in 1995. Because of rapid growth in the bison industry, strict grading and comprehensive marketing initiatives became ever more essential in the early 1990s.

There are nine grades that cuts of bison can receive according to the official system: A1, A2, A3, B1, B2, C1, C2, D1, and D2. These grades are determined by using the following four factors:

When determining the quality of bison meat, the first factor considered is maturity, otherwise known as the age of the bison. The maturity of a bison is important because it is directly related to the tenderness of the meat.

In general, bison live longer than cows, and they also tend to ossify slower. Ossification is the natural process of bone formation or the hardening, as of muscular tissue, into a bony substance. In bison, this process occurs more rapidly in the front quarters than in the hinds.

As it pertains to the practice of meat grading, muscling refers to the proportionate development of parts or wholesale cuts of the carcass, as well as to the ratio of meat to bone. Muscling in a bison carcass is determined using the same methods and criteria as beef.

Bison, however, tend to be much more heavily muscled in their front quarters and much less muscled in their hind quarters when compared to beef. When making the final muscling determination, graders always take this fact into account.

When determining the quality of different cuts of bison, the first factor that is considered is the color of the meat. Color is best measured by examining a cross-section of loin muscle about ten minutes after it has been exposed to the knife ribbing.

The highest grades of bison meat, A1, A2, A3, and B1, are only given when the flesh is firm and bright red in color. While dark-cutting meat typically has the same eating qualities as bright red meat, the latter tends to be the more preferred by the consumer.

The color of the fat itself is also of importance to those establishing grades for varying cuts of bison. In the A and B1 grades, no degree of yellow fat is acceptable. Ideally, fat present among the highest grades of bison meat should be white or slightly tinged with a reddish or amber color.

If you’d like to read more, be sure to learn a bit more about The Bison Grading System today. If you’re interested in finding bison products available near you, don’t hesitate to give us a call at 1-877-844-2231 to place your bison order today!