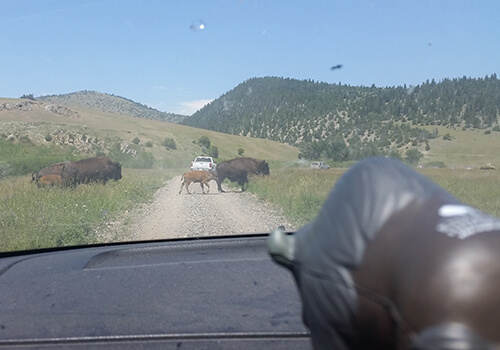 Stuffy the Buffy went on quite the adventure in early July, as he took in the International Bison Conference at Big Sky, Montana. Stuffy started his trip by taking the opportunity to check out Yellowstone National Park, seeing that it was so close to the conference headquarters. Stuffy enjoyed all the sights, taking in Old Faithful, gazing out at Yellowstone Lake, and even squaring up to an elk. Stuffy was fortunate to also be able to say hello to some of the bison herd, as they were roaming freely close by. 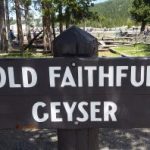 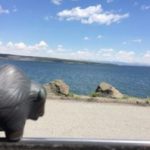 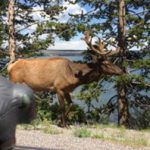 The next day, it was off to the 320 Guest Ranch, the location for the kickstart to the conference. At the ranch, guests (numbered 600 plus) were treated to a rib luncheon followed by a welcome by Roy Liedtke, President of the National Bison Association. During the afternoon, Stuffy took in a drone demonstration, toured around the ranch, and stayed cool by dipping his hooves in a stream. 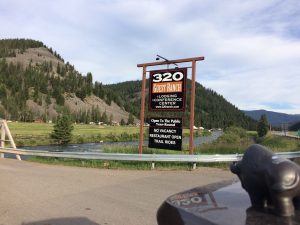 Shortly before the delightful trout cookout dinner, musical entertainment was provided by the Michael Martin Murphey Trio. After dinner, it was time to head back to Big Sky Resort where fireworks lit up the sky for the 4th of July Independence Day Celebration.

Wednesday morning was filled with education, with presentation topics covering climate, bison health, and the future of the bison. During lunch, there was a special announcement centering on the new goal for bison restoration: Bison One Million. This was the launching of the formal ‘Bison One Million’ campaign, and became a pinnacle concept for the remainder of the conference. This campaign definitely excited Stuffy, as he is looking forward to strengthening his numbers, as well as the industry as a whole. After lunch, attendees had some free time to take in Big Sky Resort sites and activities. Stuffy headed straight up one of the chair lifts to take in the view from the top of the mountain. Stuffy once again felt the need to cool off, this time in some snow that still remained at the top despite the 27 degree Celsius weather! 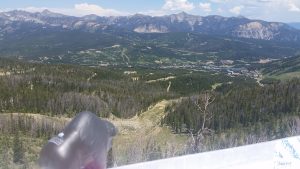 In the evening, everyone gathered for an absolutely delicious, 100% grass fed, New York Strip Steak dinner sponsored by Northstar Bison. The evening ended with some relaxation, discussion, and entertainment provided by Wylie & the Wild West Concert.

Thursday started off with a breakfast sponsored by EPIC Provisions Protein Powder, followed by speakers focused on marketing topics such as Bison in the Global Perspective and Building the Brand of Bison. Everyone in attendance was also updated on the Canadian Code of Practices for Bison, an important topic to keep the industry strong within both Canada and the US. The afternoon saw optional activities of either poster presentations or the Bison Film Festival. If those were not enough for options, guests were also able to (throughout the entire week) check out the travelling exhibit ‘exploring the past, present, and future of this great North American mammal’ (see BisonExhibit.org). 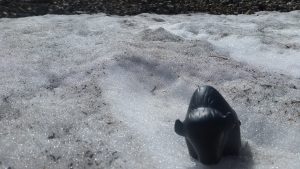 Dinner for the evening, mouth watering tenderloin, was sponsored by Intermountain Bison Co., which then led into the auction for a Yellowstone Bull, Shiloh Sharps rifle, Bison leather chair, and some other exciting items, including private label IBC wine. To say the auction was a success is perhaps an understatement, with the Yellowstone Bull going for $42,500 USD. What was yet another fun filled and informative day, concluded with some post dinner conversation and drinks while listening to the Leo Downey Jr. Band.

The final day of the conference, July 7th, was another off site adventure, this time taking place at the picturesque Flying D Ranch, owned by Ted Turner. Presentations and welcomes were given by a number of individuals, included Ted Turner himself. After a lunch of wonderfully tender ribs, guests left the ranch headquarters to either head home, back to Big Sky Resort, or the last option, a Stuffy the Buffy favorite, a tour of Flying D Ranch. A highlight of the entire event, people caravanned by car, truck, motorcycle, and even buses, to take in the opportunity to observe the handling facility and view the bison roaming and grazing on this massive and beautiful range.

From educational mornings to relaxing afternoons and fun filled evenings, IBC at Big Sky, Montana had it all. It was truly a wonderful event for Stuffy to be a part of, made that much better with the beautiful scenery and fantastic weather. During the convention’s events, Stuffy was able to learn, to take part in fellowship, and perhaps most of all, to celebrate the wonderful and magnificent animal that is our life and livelihood, the bison.