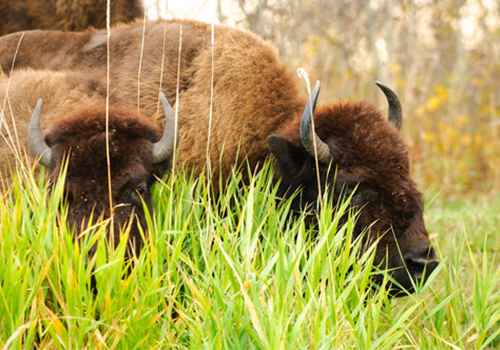 Unlike questionable cattle herding practices being employed on many farms throughout North America, raising bison requires much less effort and can be done in a much more humane manner. Bison on many Canadian farms are allowed to roam freely over expansive pastures, consuming only native grasses and shrubs they find suitable.

Most cattle diets are supplemented with specific hormones designed to bulk them up and improve the cuts of meat that will eventually be sold when the cow is brought to slaughter. This process is underway on most chicken farms and with some fish species as well.

Bison, however, don’t require hormones to bulk up. Bison meat is naturally leaner than cattle and chicken, has a lower fat content than some fish, including halibut, and also contains more Omega-3 fatty acids than salmon.

There’s really no need to ‘supplement’ the bison’s natural diet with potentially harmful hormones because of the natural quality of the meat. Whereas we’ve seen the need to bulk up meats derived from chicken, cattle, and even fish, bison can be used sustainably without requiring a multitude of hormones.

Because of the conditions endured by many conventionally raised farm animals, injuries and infections result in the use of antibiotics. Although these antibiotics keep the animal alive, the quality of its’ meat can be severely compromised.

When looking at bison farms across Canada, however, the norm seems like a much more ‘hands-off’ approach. With the goal of raising bison the way Mother Nature intended, bison farmers largely allow natural processes to dictate the health of their bison herds, as well as which individuals are suitable for slaughter at a given time.

From the consumer’s perspective, we’ve been seeing a large push towards more natural food sources in the past decade or two. The natural methods use to raise and slaughter bison as a source of lean red meat are sure to be attractive to those looking for healthier, locally produced sources of lean protein.

Because cattle and chickens have been domesticated for many years, they tend to have more detrimental effects on their grazing environment. Cattle have a destructive tendency to stay in one place, grazing until the area is exhausted of all edible grasses before moving onto another spot. This is largely responsible for the dirt-filled pastures often left behind by large herds of cattle.

Bison, on the other hand, have never been domesticated on a large scale. Because of this, they still interact with their environment in a much friendlier manner. As the bison graze, their urine and manure provide essential nutrients for nearby plant cover while their hooves stir up the soil, which helps to bury seeds and create small pockets where precious moisture will accumulate.

THE SHIFT TOWARDS NATURAL FARMING

While conventional, ‘mass meat farming’ continues across much of the Americas, efforts to find and promote natural sources of red meat are certainly well underway. The natural benefits of raising bison go beyond those few mentioned here, but we encourage those that haven’t yet tasted this deliciously lean meat to visit our website or give us a call at 1-877-844-2231 to place your bison order today!