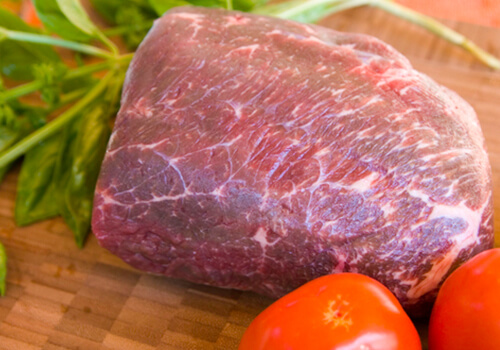 As the mass-meat industry continues to come under increasing scrutiny, consumers are inevitably searching for alternative sources of meat that are produced more humanely. As we become more and more aware of where our food is coming from, it’s essential that we support better practices when it comes to the slaughtering and processing of animal meat.

In this search, many people are discovering the delicious taste of bison. While bison is considerably healthier than most beef, it tastes very similar but is typically sweeter and richer than beef. For the novice chef, it’s good to know that bison can be prepared in largely the same way that you’d prepare beef.

At Canadian Rangeland, we are committed to supporting the Canadian Bison industry. For all of our offerings, slaughter, processing, and the production of value-added items are exclusively performed and handled in Canada.

Since the end of the 19th century, when bison were nearly extinct in North America, their population has risen back up to nearly a half a million animals. It should be noted that only a small percentage are roaming freely in national parks in Canada and the U.S., and the rest are primarily located on large, privately owned farms and ranches throughout Western Canada and the U.S. Midwest.

If you’re new to the idea of eating bison, you should take a second to find out more about one of North America’s largest, and oldest, mammals. Here are a few important benefits of consuming bison:

Bison is very nutrient dense and it’s also low in fat and cholesterol. Studies have shown that bison meat has an amount of Omega-3s comparable to salmon, which is three to six times more than your average, grain-fed meat. From a nutrition perspective, bison will give you more protein, more nutrients, fewer calories, and less fat than industrially produced meat from domestic livestock.

Bison contains the highest-known levels of conjugated linoleic acid, or CLA. This acid is useful both as a fat blocker and anti-carcinogen. Research on the benefits of the acid has shown that it has the potential to reduce risk of cancer, obesity, and diabetes, as well as a number of other immune disorders.

Bison meat also contains a high level of selenium, which is a natural trace element that acts as a mood elevator. It should be noted that bison has been shown to contain up to four times more selenium than other animals that are primarily fed a grain-based diet.

Bison has also been found to contain four times more vitamin E than beef from a cow that has been fed a grain-heavy diet. Bison is also a great source of the vitamin beta-carotene, which is a vital antioxidant that reduces the risk of cancer by actively preventing cell degeneration.

If you’re interested in learning more about bison, or if you’d like to explore some of our bison products, please don’t hesitate to visit our website or give us a call at 1-877-844-2231 to place your order today!