Bison Vs. Beef: Why Bison Is A Better Choice 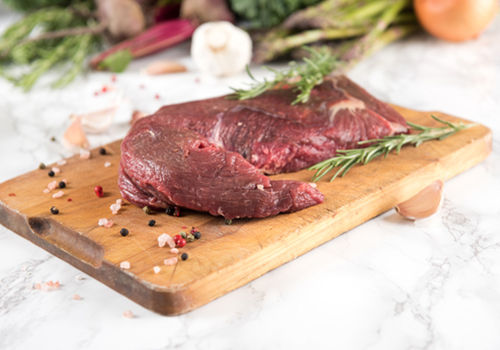 Concerns over the process behind industrial meat production are growing as we become more aware of where we’re sourcing our food. More and more people are shying away from traditional, grain-fed animal meats in favor of more healthy alternatives.

One such alternative is bison, an animal that was nearly extinct at the end of the 19th century. The bison population in North America has grown since then, with many animals protected in national parks or on large, family-owned ranches throughout Western Canada and the Midwest region of the U.S.

If you’ve traditionally been a red-meat-eater, you might be surprised to know just how great bison can be for you. Here we will examine the differences between bison and red meat and why bison is ultimately a better choice:

While both bison and beef aren’t considered to be great sources of vitamins, both do contain trace amount of vitamins B and E. Both meats are high in phosphorus and potassium, and they contain comparable amounts of zinc. Where bison has a leg up, however, is in the iron department, where it contains nearly twice as much as beef.

Both meats, of course, are great sources of rich protein. Protein is essential for the growth and repair of hard and soft tissues, such as bone and muscle. While the difference between the two is minimal, bison contains slightly more protein than beef. For example, a six-ounce cut of bison would be expected to contain about 48 grams of protein while an identical cut of beef would typically contain about 46 grams of protein.

The larger differences between bison and beef come in calorie and fat content. For those seeking to put on extra pounds to improve sports performance, beef has been found to be a better choice because of its’ higher calorie count in comparison to bison.

A six-ounce cut of beef would contain around 415 calories while the same sized cut of bison would only contain about 290 calories. This makes bison a more attractive meat option for anyone looking to start an effective diet regime without giving up meat entirely.

As you might have guessed from the calorie count above, bison is considerably leaner than beef. You can expect a six-ounce cut of beef to contain 24 grams of fat while an identical cut of bison would contain only 10 grams of fat. Saturated fat content is also higher in beef than in bison. For a six-ounce cut, the difference between saturated fat content of beef and bison would be 10 grams to 4 grams, respectively.

While bison and beef have a number of nutritional similarities, there are certainly some key differences you need to be aware of. Fat content and calorie count are two of the major differences, and they are a big reason why the Academy of Nutrition and Dietetics recommends bison as a healthy alternative to beef.

If you’re interested in learning more about the various bison products available from Canadian Rangeland, please don’t hesitate to visit our website or give us a call at 1-877-844-2231 to place your bison order today!