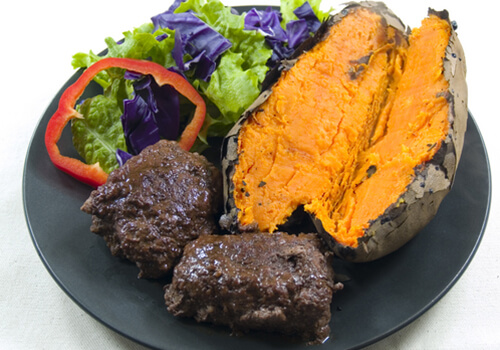 Experimenting with new recipes is one of the best aspects of having a kitchen primed for your cooking needs. Preparing meals at home is not only cheaper than dining out, but it can also help you find a renewed sense of ownership over the fuel you’re putting in your body.

At Canadian Rangeland, we are dedicated to bringing high-quality bison meat to residents all over Canada. Our cuts of bison are perfect for all your home-cooking needs! Here are a few creative recipes for bison, as well as some excellent side dish recommendations:

This relatively simple recipe requires a pound of pre-made bison bratwurst, two apples cut into wedges, a tablespoon of chicken broth, four medium-size potatoes, a whole chopped onion, one cup of apple juice, and, if you prefer, one two-pound bag of sauerkraut.

Begin this recipe by browning the sausage with the chicken broth in a nonstick skillet. Once your sausage is browned, add onion, drained sauerkraut, apples, and potatoes around your sausage. Top everything with the apple juice and a little salt and pepper to taste. Cover and simmer over low heat for 30-40 minutes, stirring occasionally. Test potatoes with fork for readiness before serving.

While this recipe will provide substantial sustenance for a family of four, you might also consider adding a tasty side dish to round your meal out. For a large and tasty baked bean recipe that will leave you with plenty of leftovers, combine two gallons pork and beans, three tablespoons of mustard, one cup brown sugar, two cups barbeque sauce, three tablespoons onion bits, and one-half cup of bison bits. Bake at 350 degrees for 45 minutes and store leftovers in a sealed container in your refrigerator.

Begin by combining lettuce, cheese, green onion, and salad dressing and arranging this mixture over your tortilla. Add bison, sundried tomatoes, and a dash of pepper to taste. Fold in bottom and top of your tortilla and roll to create your delicious bison wrap.

If the wrap in itself isn’t enough, try making your own German potato salad to go along with it. For this, you’ll need nine whole potatoes, ¾-cup sugar, a half cup bison bits, half cup finely chopped onion, one tablespoon flour, one cup vinegar, one tablespoon olive oil, half cup water, and a pinch of salt.

Start by boiling potatoes with a pinch of salt until soft. Then drain potatoes, cut into thin slices, and mix in chopped onion. Create sauce by combining flour and oil, then adding vinegar, water, and sugar until sauce begins to thicken. When content with the thickness of your sauce, pour over potato and onion mixture, add bison bits last, and place your entire creation in the fridge for a couple hours. Once your potato salad solidifies it can be served hot or cold.

If you’re looking for a leaner, healthier source of red meat, bison may just be your answer! Check out the cuts of bison available from Canadian Rangeland, or give us a call at 1-877-844-2231 to discuss your needs and our products today!